Not only that, your body depends on it.

Let us shed some light on the correlation between forgiveness and good health. You need to be aware of the dangers of holding a grudge and what it means to your body and to know the benefits of forgiveness. According to John Hopkins Medicine, “chronic anger puts you into a fight-or-flight mode, which results in numerous changes in heart rate, blood pressure and immune response. Those changes, then, increase the risk of depression, heart disease and diabetes, among other conditions. Forgiveness, however, calms stress levels, leading to improved health.”

It is why so many wise people talked of forgiveness, such as Martin Luther King Jr., Mahatma Gandhi, Bruce Lee, John F. Kennedy, Buddha, Oscar Wilde, Mark Twain, and others. Lest we forget, TRUE forgiveness is when you want the best for the person that has wronged you. Research from the Journal of Health Psychology has seen that forgiveness by itself all but erased the connection in stress with mental illness, but they need more research into why that is so. Can forgiveness be learned? Boffins believe so, which is why mental health professionals try to integrate it into therapy sessions and for people to work on it at home.

It is very important to think about your situation and what has happened to you, identifying with the causes of your pent-up anger and meeting them head on, dealing with them with self-love. If you must, talk to the people who caused you harm and tell them how it made you feel. Do whatever it takes to free yourself from the chains of anger, the key to unlock yourself is forgiveness. It is good for your health in general and it makes you a more positive-oriented person, with more charisma and a zest for life.

There is a story of Buddha when a man spat in his face while talking to his disciples. He wiped off the spit and asked the man what he wanted to say next. Puzzled, the man was thrown off balance as this was not the usual reaction to being spat in the face. The man returned home and could not sleep that night, clearly consumed by the experience, as he was soaking his bed sheets with sweat. The next day, the man went back to Buddha and threw himself at Buddha’s feet, asking for forgiveness. 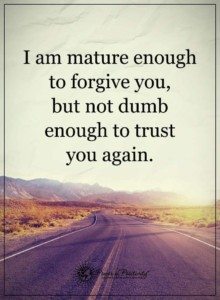 Buddha said that he was not the same man as the previous day, that the river keeps on flowing and is never the same again, for every man is a river and much has happened in twenty-four hours. He added that the man was also not the same. He had changed from being a man who spat in someone’s face to throwing himself to the feet of the person at whom he spat. Buddha finished by telling him to come closer and talk of something else. In this story, forgiveness is implied and not even the precise words are needed to say that you forgive, or you have been forgiven.

We end with this quote from Mark Twain: “Forgiveness is the fragrance that the violet sheds on the heel that has crushed it.” Forgiveness is what you give for having a healthy, happy life smelling of roses.

One thought on “Forgiveness Can Improve Your Health”